Behind the Scenes: Micropile Drilling

Micropile is the name given to a type of small pile which is centrally reinforced by steel tendons and typically between 100mm to 300mm in diametre. Micropile drilling in Canada is a cost effective solution to infrastructure needs.

When carried out by professional micropile drilling contractors, such as Brewster Well Drilling, micropiles can be installed in almost any geological formation and have capacities up to 2500kn. 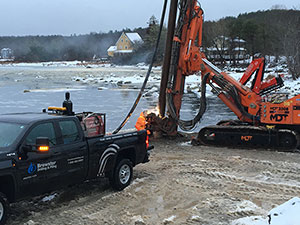 There are numerous applications for micropile drilling throughout Canada. It can be used to create foundations for new structures and to strengthen the foundation of existing structures. Even to stabilize slopes. Micropile drilling in Canada is gaining acceptance and popularity because it is capable of meeting regulations requiring low-noise and low-vibration work.

One of the most frequent uses of micropile drilling is in areas of low headroom or restricted access. It can also be used in areas with difficult ground conditions and where there would be a risk of liquefaction if pile driving was used.

The micropile drilling process begins by positioning the drill above the drill point and ensuring precise inclination before drilling starts. The specific drilling method which will be used depends on the condition of the ground and the proximity to existing infrastructure.

Temporary or permanent casing can be used during the micropile drilling process in Canada. Casing is advanced until firm soil or rock is reached and then imbedded in the rock. Beyond that point, drilling can typically continue without casing. Once the desired depth has been reached, drilling stops and the inside of the casing is flushed of any remaining soil particles with either water or air. The reinforcing steel is then lowered into the drill hole. In some cases it is necessary to advance an inner casing to case friable zones and prevent collapse during the grouting process.

Grout is prepared by using a colloidal mixer to produce a grout free of lumps and undispersed cement. Cement, additives and water are added in precise quantities to ensure the intended strength and shrinkage characteristics are achieved. Admixtures to control shrinkage, increase strength and decrease grout takes are typically used. The mixed grout is then transferred to a holding tank where it is continuously agitated until it is pumped. The grout is pumped into the bottom of the borehole via a tremmie pipe. In some instances packers are used to increase the injection pressure in the formation.

Brewster Well Drilling has the advanced equipment and the highly trained personnel needed to install strong and durable micropiles. With our dual rotary equipment we can perform micropile drilling in Canada in just about any type of geological formation. We are capable of completing any micropile drilling project both quickly and safely.